Lepus Marihare walks on its hind legs, freeing its front limbs for attacking its prey. Its strong hind legs allow it to run at high speeds for short distances, to chase down its prey. It will take off from a stand still on all fours, giving it great acceleration.

With a ravenous apeitite, Lepus will attack almost anything without thought.

Often attacks animals that can defend themselves, such as Needlenose Giraffa or the Hoolock Gibbon, resulting in Lepus retreating with it's injuries.

Plains, such as around the Initial Crash Site, but can also be found in Forests.

When coming into range of Lepus, it will charge at you. Walking backwards or rolling just as it reaches you, will avoid the initial attack. 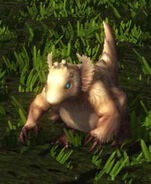 Add a photo to this gallery
Retrieved from "https://planet-explorers-archive.fandom.com/wiki/Lepus_Marihare?oldid=5084"
Community content is available under CC-BY-SA unless otherwise noted.