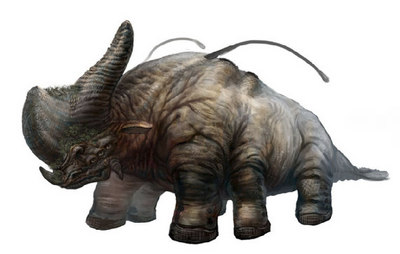 The Coelodonta Uredklad is undoubtedly one of the toughest animals found in the grasslands. Thankfully, it is not very observant and you can easily avoid them.

The Coelodonta Uredklad does not appear to be aggressive towards other animals, and is rarely attacked. If lured into attacking others, by using the ranged attacks of other animals to aggro it, it will destroy most other animals. Perhaps the only wildlife in the grassland that can challenge it is the Harpia Red Korona.

This creature attacks with a violent rush, smash its opponents with a sideways movement of its head. It can also rise up and slam the ground, causing damage and flooring any characters who are unfortunate enough to be inside its range.

To hunt the Coelodonta Uredklad you will need a ranged weapon, preferably a gun, with lots of ammunition. Take advantage of long range weapons and don't forget to dodge (double tap the strafe button with a weapon active) to avoid its devastating strikes. Depending on the power of your weapons, it may take 20-30 shots to kill, although the most powerful weapons may be able to kill it in only a dozen. Once you manage to kill it you will usually find several dozen meat, a few bones, and occasionally an animal skin.

Retrieved from "https://planet-explorers-archive.fandom.com/wiki/Coelodonta_Uredklad?oldid=5057"
Community content is available under CC-BY-SA unless otherwise noted.