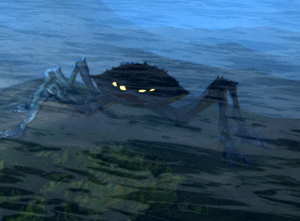 The Andhera is a crab-like animal that only comes out during the night. They are easily spotted with their glowing eyes.

Andheras are aggressive hunters that will attack other creatures such as Cervidae Stags at night. They only spawn at night, or in cave systems. They are frightened of light and will retreat when the player is holding a torch, flashlight, or has the headlamp equipped. They do not appear to cooperate and currently may ignore the presence of light if they are hunting another animal or eating a corpse. They appear to be amphibious, but this may just be a side effect of running from light sources. It is unclear if drowning has been implemented for animals.

Currently the AI for Andhera's is somewhat weak. They will retreat in the face of light, but will not respond to ranged weapon attacks. It is very easy to paralyze them with the headlamp, then kill them with 4-6 arrows from an Iron Bow. They yield 5-8 meat.

Community content is available under CC-BY-SA unless otherwise noted.
Advertisement